Slab city definitely lived up to its quirkiness. Many of you have probably never even heard of this city unless you’ve been to it or have seen its popular site called Salvation Mountain. It is located 100 miles northeast of San Diego, California, near Salten Sea and in the middle of nowhere, really. The Salvation Mountain basically brings in (if not) most of the visitors to the area and on this trip it was my 2nd time visiting the Salvation Mountain to sightsee with a few friends. Out first stop at the Salvation Mountain required onsite exploration including taking several photos and looking at the site closer than my first visit. After we were done, someone in the group had an idea about continuing driving further down the road, the opposite of where we came in. And so, we ventured on.

Truthfully, I didn’t think Slab City had a ton to see before I ever visited the area. I didn’t see the appeal and I didn’t think there was much to see. However, my curiosity set in when someone showed me the Salvation Mountain images. I thought it was interesting, to say the least. I remembered someone mentioning that it is a place to live off the grid and it’s true. I researched a few times about the city and it is a place where there are no electricity or water, it is uncontrolled, no fees to deal with, and you basically come here at your own risk; hence why it is called the “Slab City” because people come to live here to stretch their retirement income or are squatters.

After driving around, we came to a point directing us to East Jesus. We had no idea where it was taking us except that we thought the name was pretty cool. Little did we know that East Jesus is an art installation spot. It’s an open area, it’s free and you can walk around and see repurposed or recycled items turned into art. I actually thought it was cool and I found it quite similar to the art installations you’d see at Burning Man but, on a much smaller scale.

After roaming around for about an hour or so, we said our goodbyes to our group and departed. On our way home, my friend and I made a quick stop to see the sunset at Bombay Beach.

Although, the real reason for stopping here was really to explore this abandoned community across the street from the beach. When we went through the neighborhood we saw a lot of homes closed or damaged but, we would also come across one or two that are up for sale or rent. Then, there were a few homes where people still live in them.

We drove once by this home where we came across a family sitting on their patio. They look at us and waved happily. I guess based on their reaction, they probably get a ton of visitors or out of towners like us who are just as curious about their neighborhood like us. Heck, I would probably do the same if I were in their position. 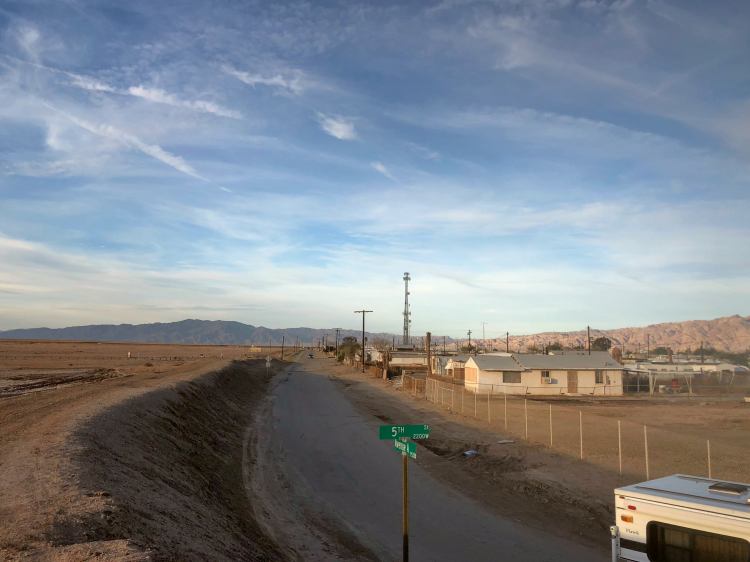