A few months ago V and I had one of our many conversations on the train while en route to yet, another destination. That day, we talked a lot about places we wanted to see before we left Europe and we both agreed on Geneva as one of the cities to see. Fast forward a few months later, well, little did we know a trip to Geneva would become a reality and more importantly, it would be our last European trip together. 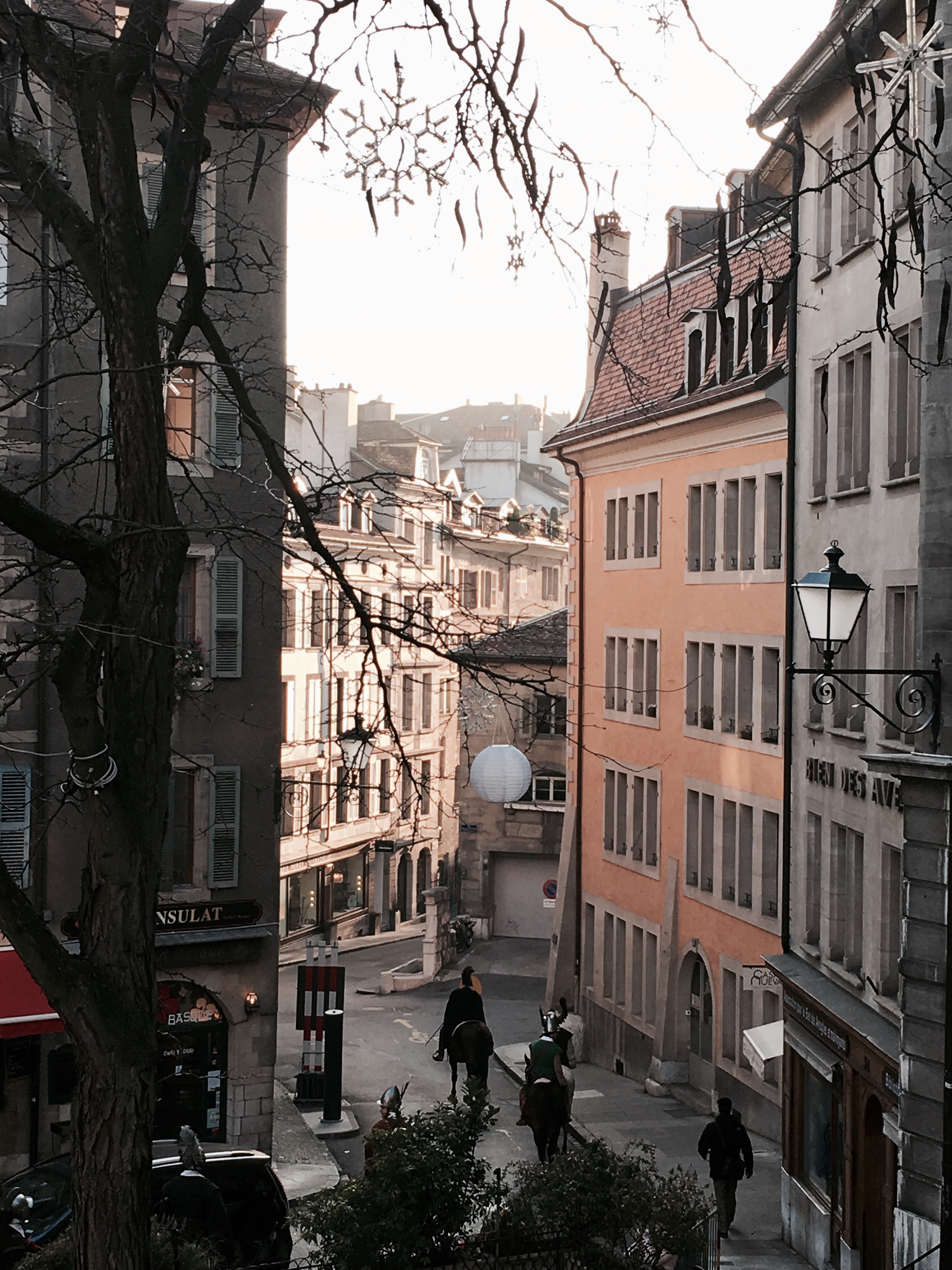 Coming to Geneva I assumed it would be just another weekend getaway. It turns out the city was celebrating their annual L’Escalade Festival. We had no idea and we sure got lucky because the city was alive. They had people in costumes, several parades at different parts of the city, markets selling hot chocolate and wine, plus back to back shows. It was much better than I imagined. Yes, we were very very lucky. 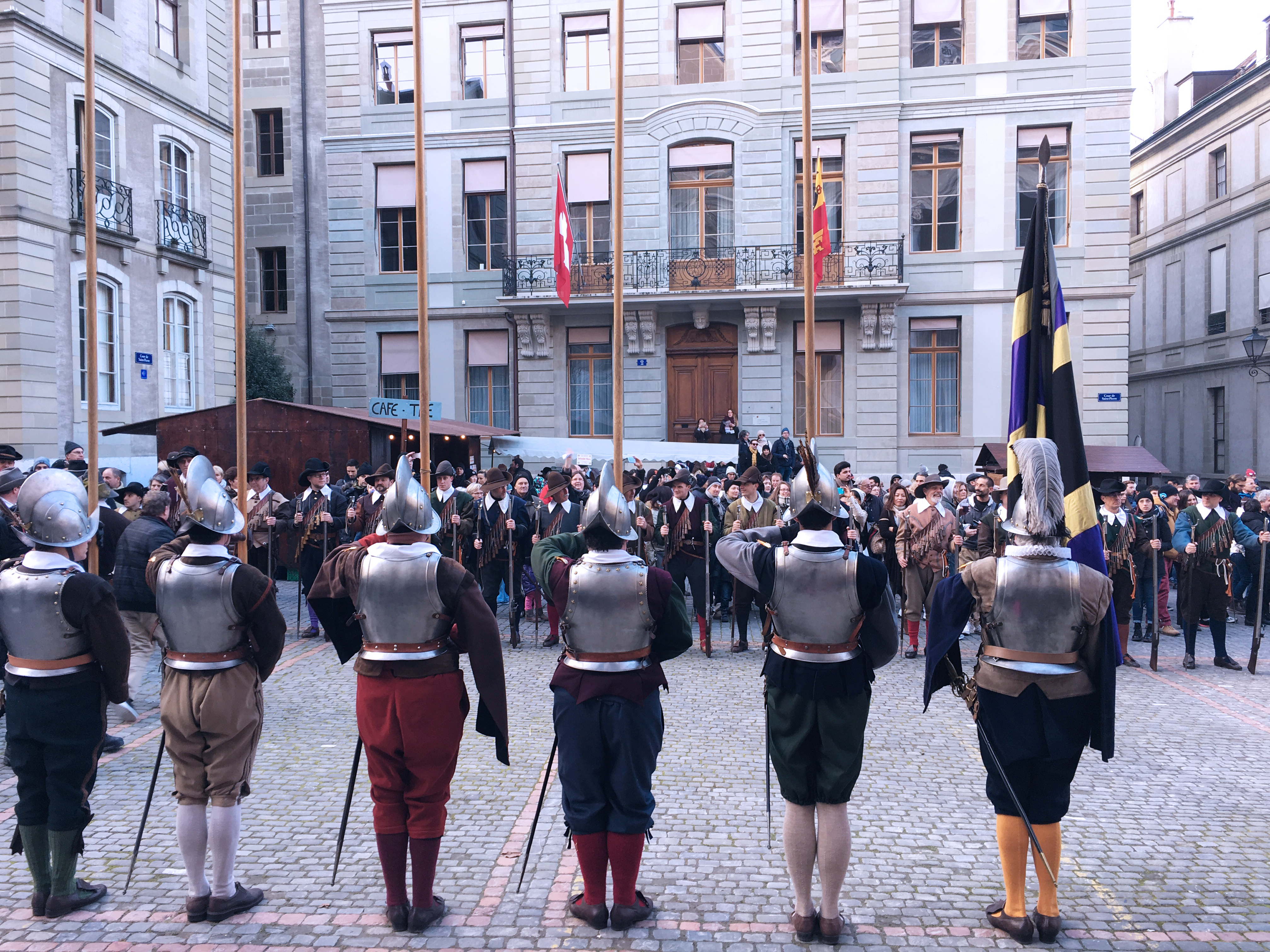 Here is a reenactment of the battle against the Duke of Savoy attack in front of the Catherale Saint-Pierre de Geneve. It lasted for 30 minutes where these men in the photos showed us how they prepared to shoot to the actual firing of the gun. It was quite interesting. 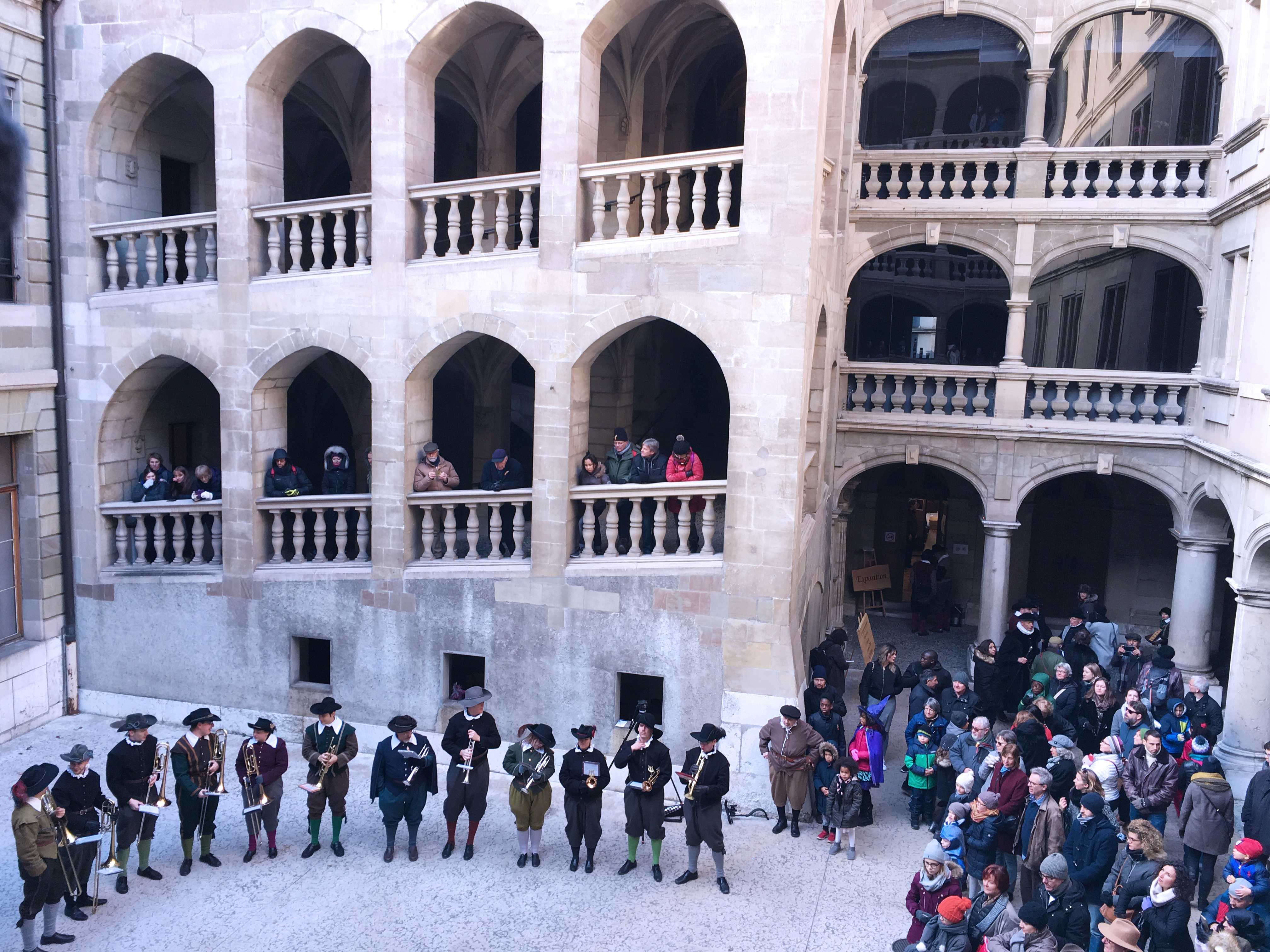 There were orchestra performances. These Chocolate Pots can’t be avoided as it is the center of a conversation. It’s basically tied to the L’Escalade Festival history. The story goes, Duke of Savoy attempted a surprise attack on Geneva around 2am and a woman cooking a pot of soup had seen the attackers. She poured this large pot over them as they made their way up climbing the walls. The noise awakened the entire city and hence, the Chocolate Pot symbol was created.

You can buy these Chocolate Pot all over Geneva with candies filled inside. They come in various sizes as you can see in the photo and are priced each at 10+ francs. Yep, they’re quite expensive but everything is generally expensive in Switzerland 😉 St. Pierre Cathedral is one of the top things to see in Geneva. It’s a beautiful church and this weekend, they allowed visitors to go up to certain parts of the church that normally would be close if it wasn’t for this festival. 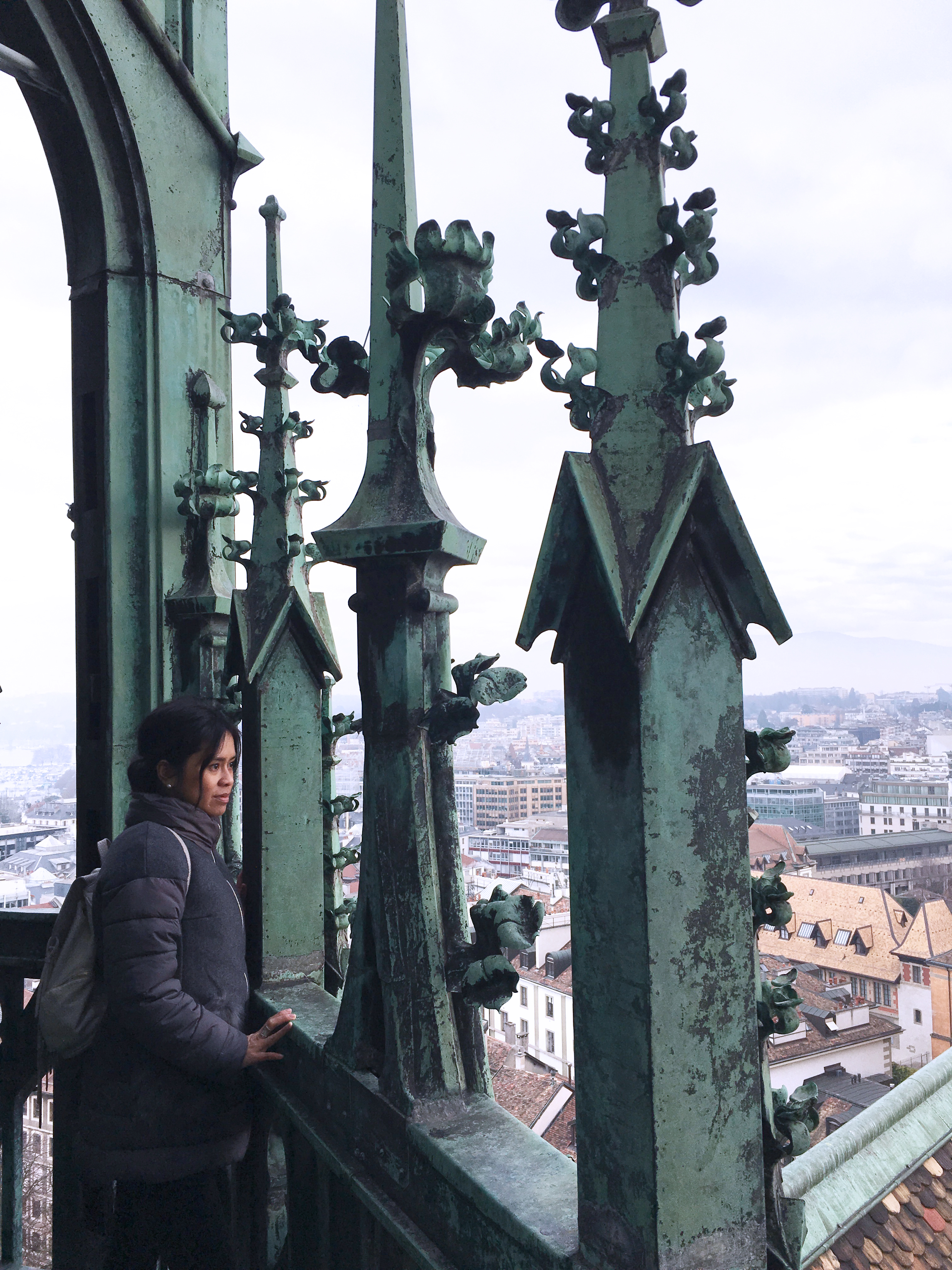 One of the best view of Geneva is from this point. I’m pretty sure they don’t allow people here on a daily basis because it’s not as steady as it looks.

The famous landmark Jet d’Eau Genève. We lucked out with the weather despite the freezing cold. V and I decided to do a walking tour as we did on our Zurich trip. Of course, this would be one of the covered topics to show on such a tour.

Another cool thing we got a chance to do was go through the former secret passage called “Passage de Monetier”. It only opens during the Escalade festival because of the narrow path you have to go through and when it opens, there’s usually a long line. Luckily, both times V and I went through they didn’t have anyone waiting.

One of the recommendations our guide mentioned to us was to see the Red Cross Museum. I highly recommend it too for anyone who’s in the Web Design field because the exhibition is very interactive. There are games you can play, movies, story-telling booths and access to a temporary exhibition. We spent at least an hour and a half here and it was worth it. The cost is 15.5 francs for adults. I believe there’s a discount for anyone younger than 23 years old. 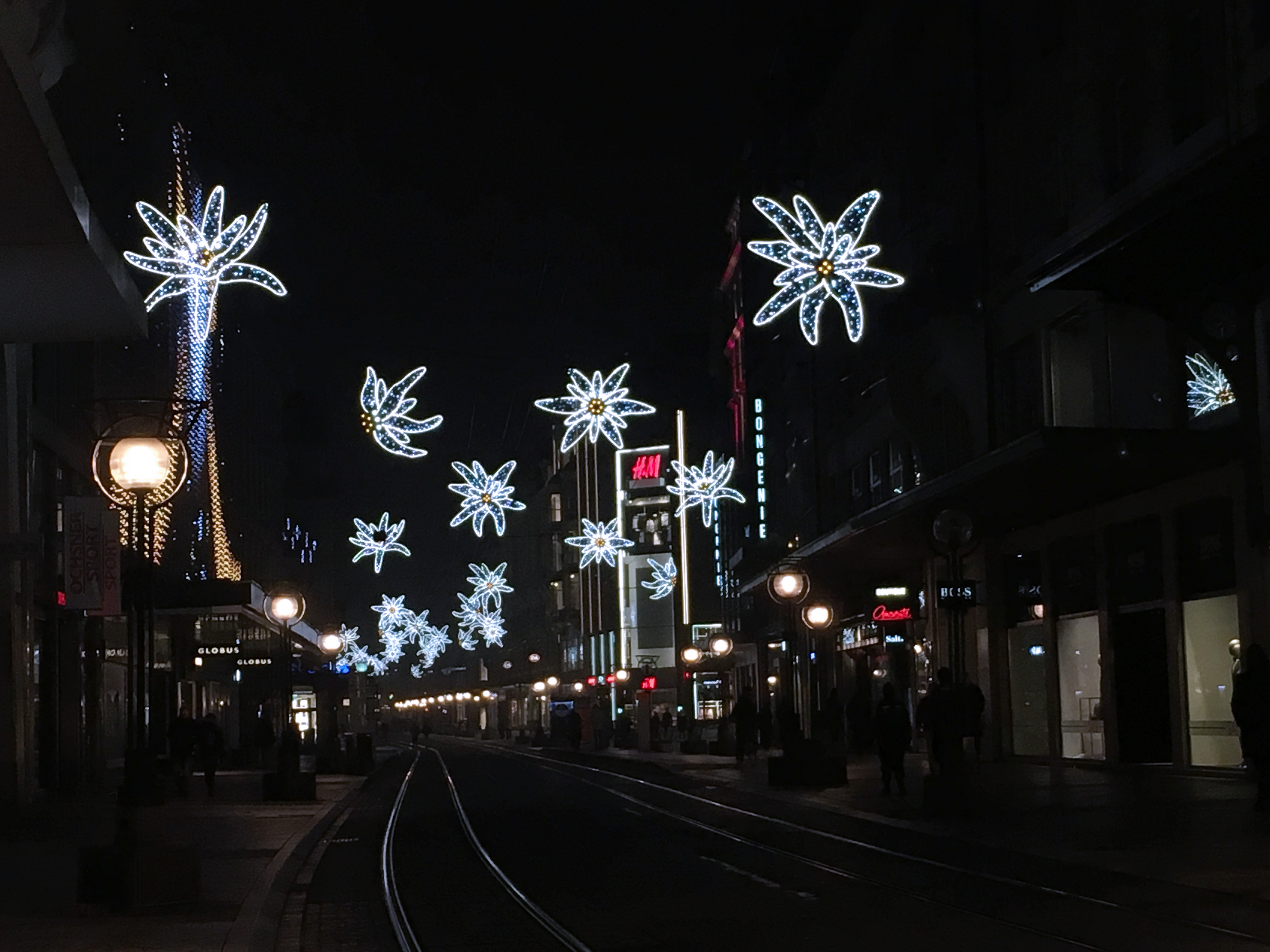 And if parades and museums aren’t your thing, there’s always a nice walk through the city with decorative lights to feast your eyes on.

Thanks everyone for taking the time in joining me on this one hell of a ride in the last year I lived in Europe. I’m glad I’ve had the chance to share all of my crazy adventures good and bad to all of you. This is not a good-bye but, a closing time of my trips (with V mostly) during my 1 year study abroad program. I am sure you will see more of A Stint Abroad roaming in Europe in the near future and everywhere else all over the world. Travel well and Merry Christmas.

One response to “Twinkling Lights in Geneva, Switzerland.”