I moved. The apartment I’ve been living in for a year in Milan was something I found on the internet through a housing agency while I was still in L.A. They were one of the few agencies that offered housing online and I didn’t have much choice because I needed a place before I came to Milan. Now, I would say that if I could bypass going through a housing agency in Milan, I would. At the time, I wanted to find a place near my school and that was my priority. Generally, this apartment is in a good area. It’s 8 minutes walking distance to my school, a few blocks down from Navigli, 8 minutes to a metro and a block down from a grocery store. It wasn’t all too bad and my room was decent. The problem I had was the agency because the apartment alone was very old and a lot of the things in the house were broken. I was ok with all of it but, getting the agency to fix anything took months to get the job done and getting any responses at all was a huge problem.

Also, there were 4 of us living in the apartment and any time someone moved out, the agency did little to let us know who would be moving in. You basically had to accept it as is.

Moving out is also the same. When I moved, any tenant under this agency had to let them know 3 months in advance when they’re leaving. Of course, I did exactly that and I included the time of when I would be moving out. Nope, they changed your time for check-out as they please. Luckily, my new roommate allowed me to come in a day in advance because oddly enough I had a feeling this agency would do something like this so, I asked a month in advance before I checked out if I could move in a day earlier in my new apartment. Can you tell how glad I am to be away from this agency? 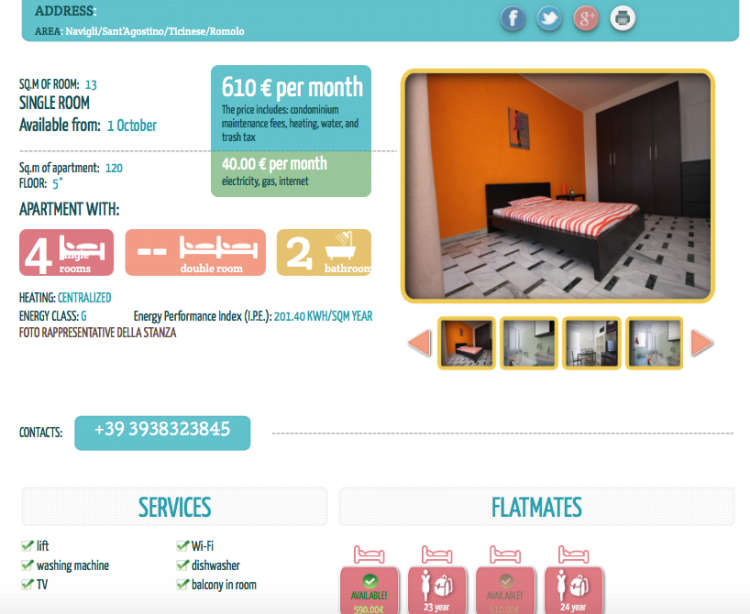 This is how it was advertised when I saw the apartment. It had clear and professional images.

This is what it looked like in real life. Yes, it’s a completely different room compare to what was advertised. Where’s that orange wall and the flooring are in wood not tiles. lol Anyway, this is the past now. If you are from abroad and need a place in Milan take the Airbnb route while you look for a solid place or see the place first before you commit. https://astintabroad.wordpress.com/2015/10/04/moving-in/