Somewhere in Balearic Island, people flock to see DJs perform, party and well, let loose. What I didn’t know is that it is also a topless island. Welcome to Ibiza!

This post is way long overdue. It was meant to go up 2 weeks ago but, our internet was down for a few weeks. Alas, it is here!

Ibiza had a wow factor! I’m still reliving those last few days of the summer looking through the photos and videos. It’s tough to pick which ones to share and which ones to hide. lol Sadly, I’m probably one of the few to admit that V and I spent more time relaxing than we did partying. One night of “clubbing” was good enough for me. Although, don’t be disappointed because Ibiza continued to party with or without me 🙂

V and I stayed in San Antoni town which, was the 2nd largest town in Ibiza situated on the west coast of the island. Overall, we had a good experience in San Antoni. Our hotel was 10-15 min. walking distance to the beach and the city center so, we really couldn’t complain. I have to say though that we did pick this area out of necessity. We thought booking our accommodation a month in advance was enough time to do so before our arrival. We were dead wrong! San Antoni was the only town that had the last few available hotels we saw when we booked our trip. We learned our lesson! I guess you really need 3-4 months in advance to book your accommodation in Ibiza if you want to come over the summer months.

If we had another choice, I would’ve preferred to stay in the old town area because it’s charming, it’s closer to the other towns (a bus ride within 12-20 min.) and it had great accessibility to the port. In San Antoni, to get to the other towns you have to take a bus/party bus ride that takes up to about an hour long. If time is not an issue for you then it wouldn’t matter where you stay.

Cala Saladeta was one of my favorite beach in Ibiza. It’s North of San Antoni and it is about an hour bus ride. What I like about this beach is that it’s a small cove with trees that overlooked the clear water. It’s very beautiful! I think it is one of the best beaches in Ibiza out of all of the ones we went to.

V and I had 1 night of “clubbing” at Ushaia Beach Club. We saw Hardwell perform and I absolutely loved the fact that we were right at the front of the stage. The guys in front of us were huge fans of Hardwell. Their energy was contagious and I found myself jumping too with the music as they did.

Not too far from our hotel, we found this restaurant called Kantaun. It became our go-to breakfast spot and they offered fresh squeezed juices, coffees and granola bowls. I ordered the granola bowl every time we came. It was delicious!

If you come to Ibiza, you have to visit Formentera. They have one of the best beaches I’ve ever seen. V and I took an early ferry ride from San Antoni. The ferry took about 3 hours to reach our destination which was just enough time for us to grab lunch and head over to the beach. We rented a bike through the ferry company we took and then went from the port to Cala Saona.

I suggest that if you want more time in Formentera, I would take the ferry from Old Town because it goes directly to the island and their schedule is flexible whereas the ferry from San Antoni had a set time schedule. We arrived at 11am and returned by 5pm. It wasn’t enough time at all to explore the island. Although, the time we had I absolutely loved Cala Saona beach. It’s one of the most beautiful beach I’ve ever seen.

The shopping in Ibiza is awesome. You can get decent summer dresses, bags and shoes that are affordable. I bought a new pair of bathing suit top under 10 euros. I lucked out since we came when they were having summer sales but, I think the prices in Ibiza were much cheaper compare to Milan.

When we explored the Old Town, it was quiet. I’m not sure if it was because everyone was at the beach or probably still sleeping from partying all day? It doesn’t matter because I liked that we could walk around without bumping through the summer crowds. 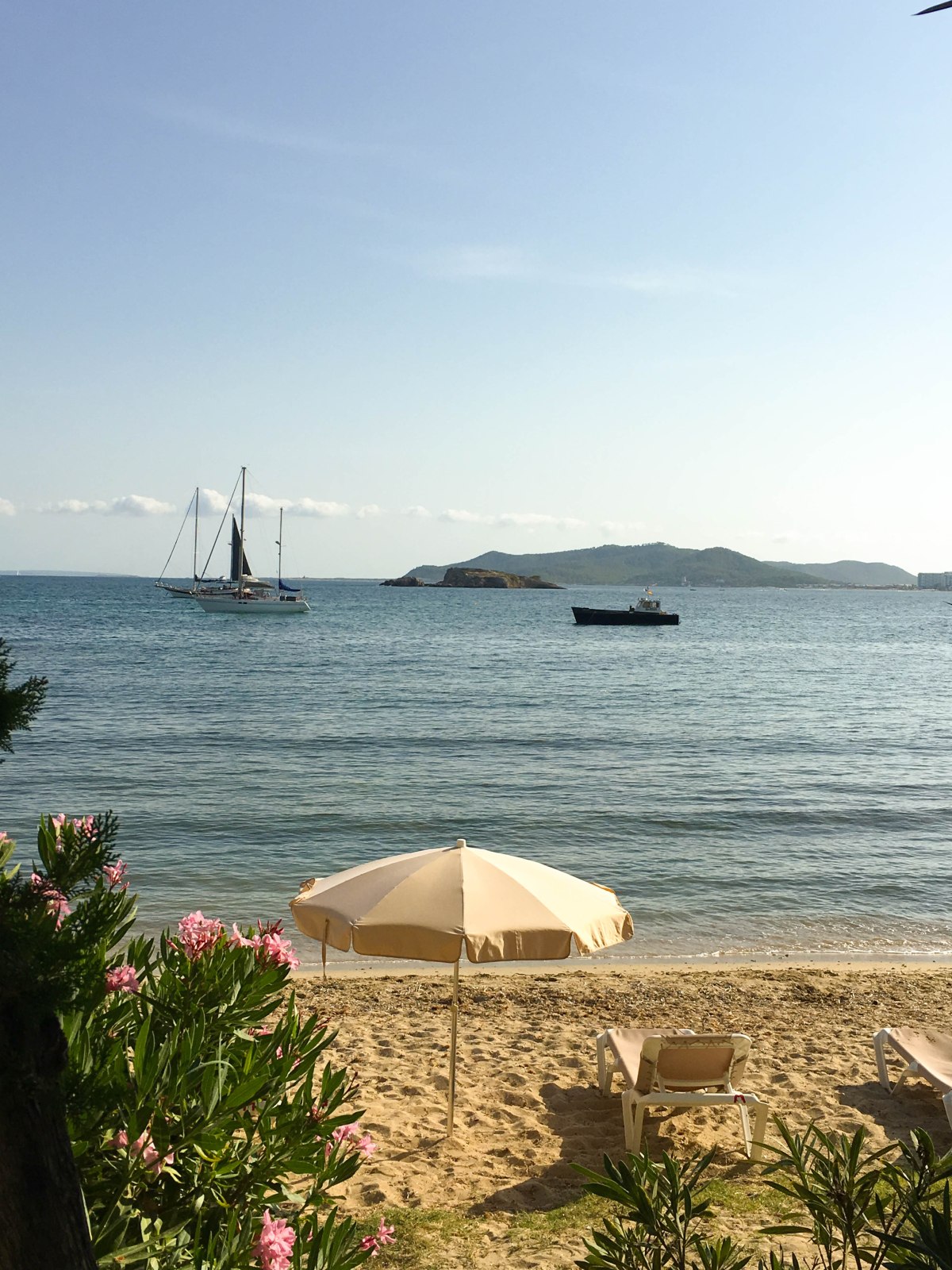 Old Town Ibiza at night is wonderful. We walked up to the castle and explored that entire area. There’s a nice view of the city if you go all the way up to the church.

This is one of the paths to the church. You won’t miss it and if you do, ask a local. They’ll lead your to the right spot.

One of the popular questions I get is if Ibiza is expensive. The answer is yes and no. If, you desire to party the entire time you are vacationing there then, absolutely it is expensive. In general, “clubbing” in Ibiza is lucrative for businesses. Basically, you pay for the entrance fees alone about the same price as going to a concert (around 40-60+ euros). Plus, add drinks that costs about 14-20+ (depending on what you get) euros weekdays and then double that on weekends. Don’t forget your food and other basic necessities (suntan lotion, chapstick, bus tickets, etc.). Yes, it can add up.

Generally, I don’t drink much but, when we did we were approached by promoters near bars and they offered drink specials. A drink special varies from one promoter to another but, ours included 2 shots + a cocktail + a beer for 7 euros. No, I didn’t like any of the drinks, although, I went for it to get in the groove of what San Antoni bars was like. Also, this is to show you that it’s one way of saving money when you’re in Ibiza if, bar hopping and partying is what you desired to do. Eating in Ibiza is more or less the same as in Milan. The standard plates costs around 8 euros and can go up to 12+ depending on where you go. Of course, closer to the beach and the city center is a bit pricier but, if you look around hidden streets you can find decent food that are affordable. In the end, Ibiza is really what you make it out to be. If you like to party and hit the beach then, this is the place for you.