A few hours at the Central Station

Today is my last week of break before school starts. I’ve been thinking of places to visit that I’ve never been to before such as Croatia or Brussels but, it seems my options are limited since it is suppose to rain the rest of the week. I know what you’re thinking, the rain shouldn’t keep me from doing any activities but, I prefer to be dry when I do any sightseeing period. That’s just me.

In any case, I attempted to take the train to Verona for the day. I thought I would get up early this morning, buy my train tickets and off I go to Verona. Nope. Things didn’t seem to go that way today. Instead, I woke at 3am, tossing and turning. Then, when I decided to finally get up to shower, our water in the building shut down. It set me back a few minutes and by the time I was at the central station it was already 10:30am. In addition, since it was my first time at the Central Station, I lost my way looking for the correct area to buy my train tickets. I wondered around the first floor going back and forth across the room from one side to the other. Finally, I found “Trenitalia” on the 2nd floor.

Once I walked in the Trenitalia room, I stood in a line not knowing whether I was suppose to take one of those waiting tickets or possibly, I was in the correct line. I had no idea. I attempted to ask the man behind me but, he did not seem to know. So, I waited. While waiting, I noticed around the room that there were people to my left who seemed to also been waiting a while. On my right side were several machines which, made me wonder what they were for or whether I could buy my tickets from there or not. I was completely lost. It turned out later on that indeed, I could’ve bought my train tickets from the machine itself. lol What a rookie move.

Anyway, as soon as it was my turn at the counter, the lady said I was in the wrong line and that I had to take the waiting number. I looked to my left and thought, this can’t be good. There were people everywhere and that side of the room just seemed like another long line. I walked over to where the lady had pointed and I stood there in question.

Similar to the Post Office experience, there, standing in front of me was yet another machine in black color. This time, it didn’t have any buttons and I simply could not understand how it worked. I wanted to ask a lady who was sitting next to it for a confirmation. However, she looked way too busy for me to try and approach her so, I opted to grab the ticket in the machine that was laying there; except, as I grabbed the ticket someone yells at me NO! lol Yep, that was my cue that indeed, this was the line I’m suppose to be on.

Anyway, there I was waiting in line again and eventually I ended up getting a waiting number. I looked at my current ticket # and compared it to the number being called on the black board. B017 vs my wait number B578. Hmmmm. 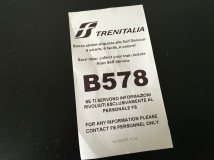 At this point, time was pushing to 11:30am. I thought, by the time I am on the train it would be 12ish and I wasn’t about to come back late at night. Therefore, I left.

Later that day, my friend informed me that I could’ve bought a ticket from one of those machines I saw. Although, at the end of the day, I wanted to be assured that I am heading to the correct stop therefore, buying it at the counter would’ve been the best option. Anyway, I decided it was the best decision to leave as their would be another time or another day to see Verona. Verona will just have to wait.

2. Metro (underground) to Trenitalia area (look for the signs on the floor leading to El Treno and follow it). It should take you to an escaltor that will lead you to the first floor.

3. 1st level is the entrance of the Central Station. You’ll know this because the station is beautiful and trust me, you’ll be in awe. If you still don’t know, look for people trying to sell you items. You won’t miss them because they’re everywhere.

4. 2nd level. Upon walking in to the entrance, you will have to go up another escalator or look for “Trenitalia”. You can’t miss these signs either.

5. Buying the ticket: Go in the middle doorway and stand in line to grab a waiting ticket OR use one of those machines on the sides. The machines will only tell you the exact exit for your destination. If you don’t know, you’ll have to stand in line and buy it at the counter.